It’s pretty much what it sounds like – you fill a garbage bin (the bigger the better) full of filthy water (and/or urine) and lean it up against the outside of someone’s dorm room or bedroom door. When they open their door (it only works for doors opening into the room), they get 30 gallons of sludgy liquid all over their feet/carpet. Some freshmen attempted to do this to me in my old fraternity days, but fortunately for them their balance was off, and the can tipped back up and righted itself in the middle of the night.

Step 1) Get onto someone’s computer when they’re not around and screen-capture their desktop.

Step 2) Save this image onto their computer somewhere they won’t find it, then set this image as their desktop background.

Step 3) They won’t notice the difference at first, because everything will look like it did before. That is, until they start trying to move icons around on their desktop and find that there’s a non-movable duplicate-image stuck beneath it (part of the background), that can’t be altered or deleted no matter how much they try. Watch their head explode as they try to figure out what the hell’s wrong with their computer. My friend Sean did this to his friend Kristian, who spent an hour on the phone with tech support until Sean finally told him what the problem with his computer was.

Greg claims this to be the perfect revenge when you’re at someone’s party and they’re mean to you. Simply use their bathroom and let one loose, not in the regular toilet bowl, but in the toilet tank up back (the Upper Deck). Just remove the lid, make your deposit, replace the lid, and bolt… your housewarming present will never get flushed down, and will continue to stink and not be found until a plumber discovers it in 4-6 weeks. See, I told you still think poop-jokes are funny.

A variation is this is the Dry Dock, which is achieved by disconnecting the water supply to the toilet bowl, then pinching a loaf directly onto the porcelain of the now-empty bowl. My brothers and I almost did this on the last day of a cruise to avenge ourselves on the unfriendly house staff, but eventually decided the turd we left was unconstitutional. That is, it was so horrendously and unfairly foul that it actually violated the Constitution, on the basis of being cruel and unusual punishment. Too cruel to even inflict on someone who’d confiscated a quarter of our smuggled Vodka supply.

I’ve never heard of anyone actually doing this, but apparently if you unscrew a showerhead and cram in a couple of chicken bouillon cubes, the next person in there will get a nice shower of chicken broth. Yummy. A variation involves cramming the showerhead with red Kool-Aid powder, which tends to stain.

#6 – The Tire Removal From a Parked Car

Self-explanatory. One of Greg’s friends says they did this to some guy in college, then sent him on a treasure hunt to find his tires. Special note: Adding a treasure hunt to the end of any prank to make the person find whatever it is that’s missing automatically adds two Hilarity Points.

My roommate Gabe did this to fellow roommate Sam with packing peanuts when he left for winter break a couple years ago, and another friend Pat had his room coated with flour when he went away for a weekend once in college. Really anything messy can work – other suggestions might include sand, cereal, or sugar (more expensive, but well worth it for the ensuing ant-problem).

If someone hadn’t squealed this one and ruined it, we would have pulled this off for our freshman prank on the fraternity in college. You hide a raw fish (or something else that will rot) in every guy’s room in the house, preferably over spring break. So when they return, there’s a rotting fish somewhere in their room… if they can find it. A friend Jim said he once carried out a variation of this involving shellfish, at least one of which was screwed into a computer tower, never to be found, even to this day.

A variation on the “tons-of-messy-shit-in-somebody’s-room” is the “cram-somebody’s-room-full-of-shit”. Jim and a few buddies once crammed a guy’s room full of eighteen dead Christmas trees, which not only filled the room but also dropped roughly 6,000,000,000 dead pine needles all over the place. A legendary version of this I heard about took place at MIT where a couple guys disassembled a car over spring break and reassembled it in a guys’ 5th floor fraternity room. The car even ran – it just couldn’t get out the door.

An older guy in college did this as his freshman prank a couple year before I got there. Basically, he took pictures of himself putting his ass on different pieces of other guys’ property, such as keyboards, hats, and tooth brushes, then mailed them the pictures… after a couple weeks of them using the stuff had gone by. Imagine using your toothbrush for two weeks and then receiving a back-dated photo of some dude putting his ass on it.

In what I think is the greatest prank I’ve ever heard, Greg’s Dad once brought two 200-lb pigs into his high school, coated them in Vaseline, painted a big racing number “1″ on the side of one pig, and a big number “3″ on the other. Then he let the panicked pigs loose during lunch. You can image in the chaos that ensued. When the janitors finally caught the pigs (not an easy task, considering the Vaseline), then they spent the next two days scouring the school… looking for Pig #2. 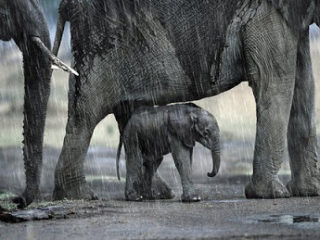